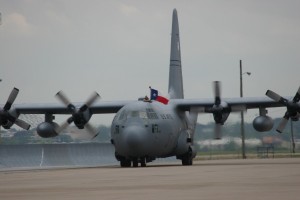 I am a proud supporter of the US Military, and serve with The Fort Worth Air Power Council. My father retired after 34 years as a C-130 pilot, and my brother has almost 20 years in the military as a C-130 navigator. In honor of the sacrifices made by so many in uniform, as well as the families that they leave behind, I wanted to share this story. This involves my brother, and was originally printed in a military journal. These events are from 2006.

BAGRAM AIRFIELD, Afghanistan –  When Maj. Wayne Vaughn looked down at the injured 12-year-old girl clinging to life on a litter being loaded in the back of his C-130 Hercules, he thought, “How can they do this? How can they try and kill a little girl?”

Taliban extremists had bombed a girls’ school in Herat in eastern Afghanistan on Sunday, June 18, killing four and injuring 11.

The little girl had a broken back and collarbone, head injuries and was in critical condition.

Major Vaughn, a navigator, automatically thought of his three daughters at home. When he returned from the mission, he planned to call them because it was Father’s Day.

For the 774th Expeditionary Airlift Squadron aircrew, all from a Texas Air National Guard unit from Fort Worth, Texas, the day started much like every other day, with orders to fly distinguished visitors, soldiers, supplies and equipment around Afghanistan.

During the last leg of the mission, after loading half a dozen passengers, they cranked up their four engines and began to roll across the ramp when the control tower squawked a message over the radio.

The air traffic controller asked if the crew could wait five minutes for an emergency medical evacuation.

Try as they might, the aircrew couldn’t communicate with any higher authorities to get authorization to fly the mission. None of their communication devices would work, for whatever reason.  They were also pressing the limit on the amount of time they were authorized to fly that day, so they desperately needed to contact someone to get approval to extend their flying hours.

Meanwhile, when they learned it was a 12-year-old patient, they looked at each other and knew what they had to do. The aircraft commander, Maj. Tim Gibbons, made the final call.

“We were going to do it no matter what, even if we got in trouble,” Major Gibbons said. “We were tired, but we weren’t exhausted. The (International Security Assistance Force) told us we were her last chance.”

ISAF is a NATO-run organization whose goal is to help Afghanistan reach a self-sustaining peace and security.

“In the back of the plane, we had Americans, Italians, Spanish and Albanians,” Major Gibbons said, “and only the Italian doctor could speak English.”

Also, at the spur of the moment, loadmasters Master Sgt. Justin Vogel and Staff Sgt. Justin Bell had to reconfigure the aircraft so it could handle the litter.

When the ambulance arrived, Major Vaughn pulled off his headset and went to the back of the plane to help load the girl.

When he grabbed the litter and looked at the girl, he wondered how anyone could do such a thing.  He heard reports about the Taliban targeting girls’ schools because they didn’t believe women should be educated, but to actually see the results firsthand was something else.

The hour-and-a-half flight to Kabul was uneventful.  When they landed, an ambulance whisked the little girl away.

When the aircrew returned here, they made Father’s Day calls home.

“It was good to call home and realize that my children are not in the same world as the kids here,” Major Gibbons said.  “But it’s mission like that that make these deployments worth it.”