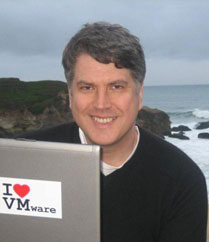 Today, I wanted to step away from a technical post to wish John Troyer a happy birthday. In fact, John is the friend that inspired me to first start blogging. In 2009, I received an email from John Troyer that informed me I had won a vExpert award from VMware. This was a new program that VMware was starting, and John Troyer was at the helm. That year, at VMWorld 2009, John organized some events for us and held a vExpert forum. There, he had Jason Boche and Steve Kaplan speak about their experiences in blogging, and I decided to start my own. That turned in to me writing for Tech Target, and eventually led to me leaving my employer of 12 years to work with Steve Kaplan at INX.

Over the last three years, I have really enjoyed getting to know John better. Not only in the vExpert program, but simply spending time with John at VMware events, communicating on twitter and listening to him host the weekly “VMware Communities Roundtable” podcast. Through each of these efforts, John has led out in supporting VMware and virtual technologies through social media. John’s LinkedIn profile describes him as “Online evangelist and enterprise community builder at VMware”, and that only touches on his talents and work. A little more digging will tell you that John played a role in developing the first internet browser for the Blackberry and holds a Ph.D. in Pharmaceutical Chemistry.

When Christopher Kusek came up with the idea to share a few thoughts about John for his birthday, I was more than glad to join in. John, thank you for all of your work in promoting virtualization and technology, and for creating outlets for us geeks to exchange ideas. Your tireless efforts continue to add value to each of the programs that you work with, and we greatly appreciate what you do.

Here is a quick “Thank You” video: