Well, I have been with INX for almost 18 months now, and it is time for a change…kind of. Actually, I am not going anywhere, but INX is changing. You may have noticed the press releases over the last few weeks about Presidio purchasing INX, and that transaction closed December 30. The final press release is located here. In fact, Presidio was purchased by American Securities mid-2011. With Presidio and INX together, American Securities has created an IT consulting and services force that will dominate the market in 2012. 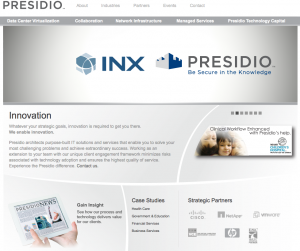 So what does this mean for Presidio and INX clients? Expect a lot more of the same high quality work, with some dramatic improvements. We now have a bigger footprint, a deeper pool of knowledge, even better vendor relationships and a roster full of rock stars in IT (http://www.presidio.com/about-presidio/technical-expertise.php – as impressive as it is, I know this list is not complete yet).

Presidio was roughly twice the size of INX in people and revenue. Together, we now have 1,800 IT professions, with over 800 of those being highly skilled consulting engineers. We also have over 45 offices across the United States. Where Presidio offices were heavily concentrated east of the Mississippi, INX was heavily concentrated west of the Mississippi. Both Presidio and INX have been dominant forces in their markets, with little crossover. This lends itself to a very easy transition that allows most INX offices to simply become regional offices within Presidio. More of those details will be made public in the future, but those are not the important details. Two highly effective and very successful service providers are merging, and a great deal of attention is being paid to leveraging the strengths of both organizations as we become the largest solution provider in the United States.

I have been involved in more mergers than I can count, and I can tell you that this one looks to be the smoothest transition that I have ever seen. I fully expect this new organization to be much greater than the sum of Presidio and INX put together. Just take a look at the impressive list of awards and recognitions that this new organization has racked up (http://www.presidio.com/about-presidio/awards-and-recognition.php).  As you look at that list, realize that this was achieved by Presidio and INX working separately, then think of what we will achieve as the new Presidio. 1 + 2 is going to equal 5, and I am excited to be a part of it.

The last 18 months have been a great ride, but I have a feeling it was just a warm up lap for the ride we have ahead of us. In fact, I think that 2012 will be so great that we will need 366 days to accommodate all of the awesomeness ;-)